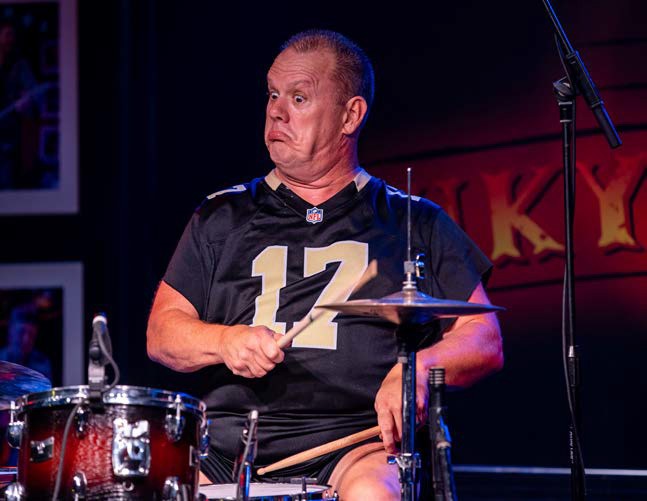 On the last night of April at The Funky Biscuit in Boca Raton, Cowboy Mouth took the stage together for the first time in over a year. The end result was electrifying. SFL Music had the pleasure of speaking with Cowboy Mouth’s vocalist and drummer, Fred LeBlanc. The multitalented artist discussed everything from the New Orleans boys’ getting on the road and recording again, to one of their most memorable tales from decades of touring together.

SFL Music: You’ve played for millions of fans in the last 3 decades. How has covid directly impacted Cowboy Mouth?

Fred LeBlanc: It has decimated everything. (Laughs). We haven’t played in 15 months. South Florida will be the first dates we’ll play since the end of February 2020.

SFL Music: What year did you form Cowboy Mouth?

Fred: Late 1990. This was actually supposed to be our 30th year celebration, but then wah wah. (Thanks covid).

SFL Music: I assume you’re excited to be headed back to the stage.

Fred: Of course I am. It should be a lot of fun for everybody. We even have fans flying in from all over the country to come see us. These are our first shows since covid hit.

SFL Music: Didn’t your last album, Open Mouth, come out right when covid was hitting the world, March of 2020?

Fred: Yup, and we were supposed to be touring the whole time.

SFL Music: Did the band use the time to create new music?

Fred: Sure, but the problem with that is we don’t all live in one location. We have a new single coming out, “The Things You Wanted to Do.” We had to record it all remotely, so we weren’t in the same room. It’ll probably be released in the middle of May on all the streaming services. We are also looking at the possibility of doing some vinyl. We just have to finalize all the details. Maybe we’ll put out our greatest hits compilation on vinyl, and maybe some singles. I just don’t know right now. We’re playing it by ear. Everything is kind of up in the air right now because we have to relearn how to do everything. The whole covid thing threw us into a loop, like it did to everybody in the world.

Fred: Yes. It was difficult because we couldn’t work out the songs beforehand. We had to figure out exactly what we were going to do from a distance. I’ll play this. You’ll play that. But it came out really well and I am pretty proud of it. At the same time, it is frustrating not to be able to work out the material on the road. 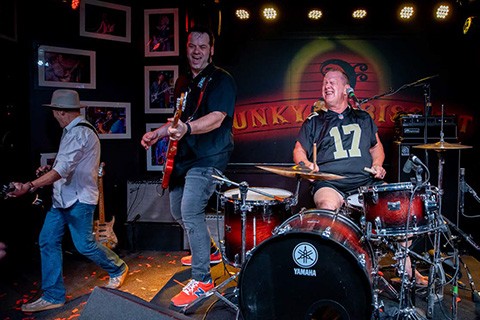 SFL Music: I know you’ve played The Funky Biscuit in Boca Raton before. It’s a great venue. What makes the Biscuit so special?

Fred: We’ve played the Biscuit many times. we love it there. The overall vibe is just so nice. The people there are always enthusiastic about seeing us. It’s just a great place. I just enjoy the overall vibe to it. Everybody is in a good mood. Everybody’s there to have a great time seeing you do your thing. There’s a lot of enthusiasm. The sound is fantastic. There’s not a bad seat in the room. It’s wonderful. I love it. Because of covid, we have to perform two shows to play to the same amount of people that we normally do in one. But we are figuring it all out and making it work.

SFL Music: Cowboy Mouth has played thousands of clubs, from BB King’s in New York to cool joints in France and Italy. Do you have a favorite?

Fred: I am pretty fond of the Biscuit. I am also a big fan of Tipitina’s. It’s a classic New Orleans venue. Then there’s a place outside Charleston, South Carolina called The Windjammer. It is literally right on the ocean. That’s probably my favorite to play simply because we always pack it out and the people always go nuts. Then as soon as the show is over I get to jump into the ocean.

SFL Music: I know living on the bayou has more than influenced your style. It actually created it. From New Orleans funk to gospel without religion, is it possible to define Cowboy Mouth’s all-inclusive sound?

Fred: I had a fan come up to me one time and say we were just like a musical joygasm. It’s just a vibe that you have to get when you come to a Cowboy Mouth show. What we do is difficult to put into words.

SFL Music: Will the vibe get you off?

Fred: Oh, completely. That’s the whole point. It’s not just about the musicians. It’s about everybody in the room leaving felling better than they have in a long, long, long time. It’s kind of line punk rock gospel, like you said, without the religion.

SFL Music: Audiences don’t get to see a drummer handling the vocals too often. Have you always multitasked onstage?

Fred: Since Cowboy Mouth, yeah. I didn’t want to spend my life looking at a guitar player’s rear end. So when I formed the band, I decided I’d be in the front. Nobody is really in the back at Cowboy Mouth.

SFL Music: Can you give me a cool or funny story from the road?

Fred: I can tell you lots of funny stories. This is my wife’s favorite story. We once played a venue in Champaign, Illinois, which is a college town. I like to throw my drums out to the audience. So we had the misfortune of playing on the coldest day of the year in Illinois. There was only about thirty people in the audience. And all the people there were wearing down jackets. Some kid up front who was going nuts. I mean it looked like he was really going crazy. So I threw him one of my drums, but he dropped it. Okay, whatever. I’ll give him another chance. Take another drum, because he was so into the show. And he dropped that one too. I was like huh? That’s weird. I go outside after the show and one of the guitar players comes up and says You know that guy you threw the drum to? I said, Yeah, and he dropped it both times. My other guitar player said That’s because he doesn’t have any arms! (Big laughs). I had to go up to the guy and apologize profusely. It’s all because that big down jacket. (Doh!)

Fred: No. I was throwing actual drums. I used to do a lot of crazy stuff like that. I still do. But throwing drums starts to cost a lot of money after a while. I like to grab the bull by the balls. I am fortunate enough to play with some damn fine musicians. I think we are a pretty hellacious little rock and roll band. I look forward to the opportunity to do it every time. Cowboy Mouth will not be going quietly into that great goodnight.