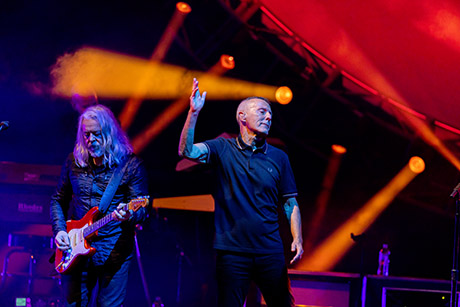 Driving to the iThink Amphitheater with all the rain clouds, it really looked like we were going to be in for a wet evening. But they moved on and left us with a light summer breeze for the rest of the evening. The crowd was very diverse – all ages and walks of life it seemed. And everyone with excitement and anticipation on their faces. 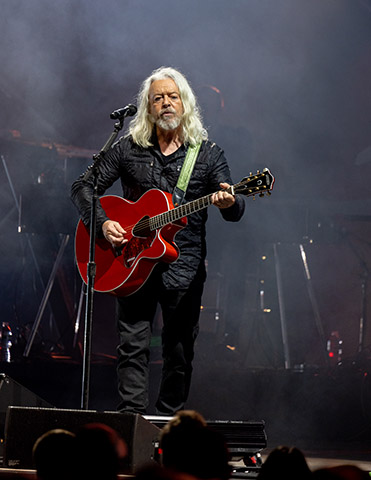 Tears for Fears started their set with 3 songs from their new album “The Tipping Point ” making it clear that they were not touring as some legacy act. It seemed like all of the new material presented by Roland Orzabal and Curt Smith was received well by the audience with many people singing along. “The Tipping Point ” is their 7th studio album and with their last album, “Everybody Loves a Happy Ending” having been released in 2004 many of us have been eagerly awaiting it’s arrival. Curt playfully said to the crowd about their new album “Those who don’t have it… shame on you”.

Of course, their hits brought everybody to their feet. “Everybody Wants to Rule the World,” “Sowing the Seeds of Love” and “Shout” were undeniable crowd pleasers you could measure by the amount of live-streaming cell phones raised. They played at least one song from every album they released except for “Raoul and the Kings of Spain” – an album made while Curt Smith had left the band. But they did do “Break It Down Again” which was recorded during the Smith-less era so I guess not much to be read into that. The lighting and stage was similar to a Pink Floyd I’d seen with a large round screen behind the band and images projected onto it.

Backup vocalist Lauren Evans sang lead on “Suffer the Children” and did the duet with Orzabal on “Woman in Chains.” The crowd was told that this was Lauren’s first show with the band and she was incredible. What a voice. Even Orzabal seemed genuinely impressed looking over at her after the numbers and applauding. The rest of the members of the band – guitarist Charlton Pettus, drummer Jamie Wollam, and keyboardist Doug Petty delivered on every song. Seriously impressive sound and performance on every level. 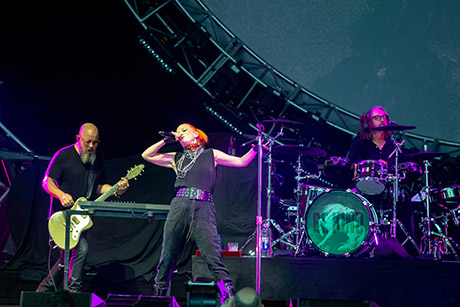 Garbage hit the stage right at 7:30 with a powerful version of “Automatic Systematic Habit.” The band’s overall live sound was slightly more aggressive than what I was expecting, but it quickly grew on me. About mid set, lead singer Shirley Manson singled out a young woman with bright pink hair and dedicated “Only Happy When It Rains” to her saying “You probably weren’t even born when this song came out. This one’s for bad bitches everywhere!” They also played the theme from the James Bond movie “The World Is Not Enough.” I had no idea that was them and it was a nice departure.