The beautifully renovated and reimagined Parker Playhouse, now simply called The Parker, has reopened keeping all of its original heritage and beauty but with a gorgeous new facelift. It now offers all new state-of-the-art acoustics which is immediately noticeable and places The Parker as one of South Florida’s premier venues for an extraordinary concert experience. All new continental seating, soaring grand entrances and enhanced hospitality spaces and bars are there for audiences to enjoy culture, conversations and cocktails. There is an all-new premium lounge named The Haller Club, which for one $35 inclusive price, offers exclusive use one hour prior to show time and during intermissions, complimentary soft drinks, premium beer and wine, coffee and tea (mixed drinks available at a lower price) plus hot and cold hors d’oeuvres and desserts. Thankfully and finally, there are all new beautiful restrooms on the main floor as well. It’s an all-around fabulous experience and the much-needed improvements makes it one of the best venues in South Florida.

Starting off the reopening of The Parker on September 22, 2021 was the triple bill of three legendary bands: Firefall, Pure Prairie League and Orleans. Pure Prairie League came out blasting and showcasing the major improvement in sound quality of the venue. Besides their giant hit “Aimee,” they rocked it with lesser-known songs, but simply great songs, “Woman” and “Angel #9,” which sounded just as fresh and dynamic as when they came out in 1972. It was a fantastic performance by Pure Prairie League to open the show. After a quick intermission and time for drinks in the bar and lobby areas, as alcohol was not allowed in the concert hall, Firefall came out and rocked the house down. “Cinderella” was absolutely amazing, as was the interesting “Sweet and Sour”. They played all their top hits, “Just Remember I Love You,” “You Are The Woman,” Strange Way,” and “Mexico,” as well as new songs off their first album in twenty years, Comet. “Way Back When” is a brand-new song off this 2020 new album that was three years in the making, and it came off great performed live. Spirit’s “Nature’s Way” is also on this album and was another highlight sung live by bassist Mark Andes who was a founding member of the band Spirit before becoming a founding member of Firefall. On the record, the Eagles’ Timothy B. Schmit is featured on vocals on “Nature’s Way.” They are currently touring with three original members- Jock Bartley, David Muse and Mark Andes, along with longtime drummer Sandy Ficca and talented newcomer from Nashville, Gary Jones. For this performance, David Muse was out ill but Jim Waddell filled in expertly. Jock Bartley, Gary Jones, and Mark Andes were outstanding as was their drummer Sandy Ficca. Firefall has many South Florida roots and spent a great deal of time in Florida recording at Criteria Recording Studios. Sandy Ficca was living in South Florida when he joined Firefall in 1984 and remembers his South Florida roots. I had the absolute pleasure of speaking with this drummer extraordinaire, who has been the backbone of Firefall since 1984. 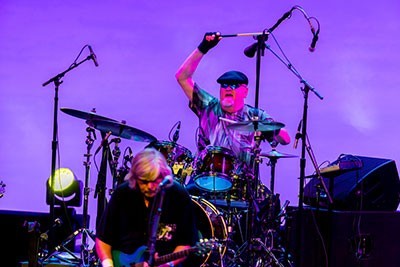 Take it away, Sandy!

Speaking of drummers extraordinaire, major sad news of Charlie Watts of the Rolling Stones passing away. As an expert drummer, what did you think of Charlie’s drumming?

He was great in the same way that Ringo Starr was great. They both didn’t play any crap. They played exactly what the song needed and that’s the type of drummer I prefer.

Did you ever meet Ringo?
No, not yet.

What about your other favorite drummer, Stevie Wonder?
I haven’t met him but a friend of mine, Carlos from South Florida, was his body guard at one time and went to Japan with Stevie. Yamaha made Stevie a special Stevie Wonder snare drum and the snare drum badge was in braille. They had made an extra drum badge and Carlos gave it to me.

Firefall has a tremendous Florida connection, with many of its members being from Florida, even though Firefall was formed in Boulder, Colorado. You lived in Hollywood, Florida, right?
Yes and I lived all over the place in South Florida.

Oh, you’re funny…
The coolest thing that happened was that’s where I was when I got hooked up with Firefall.

How did that happen?
I was working in Ft Lauderdale at Modern Music in the drum shop with Paul Crosta who was a songwriting partner with Johnne Sambataro, who was in Firefall at that time. Paul told me that Firefall was looking for a drummer and that I’d be great. I had my own band and I told him I wasn’t interested. A little time goes by and I called him about a fellow employee and he bugged me again, saying, “it’s not going to hurt you to just audition.” I finally said ok. Five minutes later, Johnne Sambataro calls and I told him I was playing at Rosebuds. On the break, this guy walks up to me (Johnne Sambataro) and hands me three cassettes and says, “you have the gig if you want it.” It’s weird but I had three weeks off from my band and Firefall needed a drummer, so I filled in. I get a call that my drum set is all set up. There were radio and tv people and a dressing room full of food. I thought… I could get used to this. I had to fire myself from my band and hire a drummer and singer to take over.

What was your favorite South Florida venue?
We played Rosebuds a lot. Pete and Lenny’s was really good. Ocean Mist on the beach. I liked the Button South in Hallandale.

What impact did South Florida have on Firefall?
It had A LOT of impact! The first three or four albums were recorded at Criteria Recording Studios in North Miami. I had some friends in the group Mother’s Finest and I did some session work at Criteria and later at Triad studios in Ft. Lauderdale.

Did you see the new Paul McCartney and Rick Rubin documentary, McCartney 3,2,1?
Yes, it was awesome! My favorite part was when Paul spoke about how cool Ringo’s drum part was. Ringo has always been dissed by everybody for so long and he’s such a great drummer for the songs. That made me really happy.

What was the best concert you’ve attended? Have you seen The Beatles?
No, haven’t seen The Beatles but I’ve seen Ringo a few times. One of my favorite concerts was seeing Bonnie Raitt, Lyle Lovett and Alison Krauss at Red Rocks. The most fun I had at a concert was a Def Leppard Concert. I had become friends with the drummer of Def Leppard, Rick Allen, who has been drumming with one arm after an accident caused him to lose his arm. He asked me for 12 Djembes (African hand drums) for a drum circle with 12 handicapped children before the show. We hung out back stage and my son is really into Def Leppard. It was a great, fun night and Red Rocks is the holy grail. 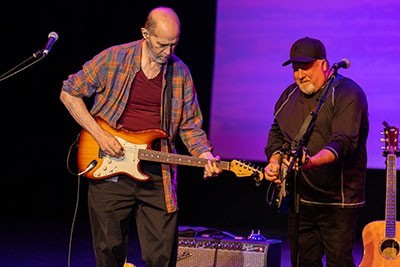 You co-wrote “The Hardest Chain” with Tony Rosario on Firefall’s new album Comet. It’s one of the best songs on the album. Tell us about that process.
I wrote some of the lyrics and worked on the melody. I have a timeshare in Vail and spent a weekend just writing songs. Initially, Jock wasn’t so sure it should go on the album, but later when we all listened, Mark Andes and David Muse said, “we need to do this song” and Jock agreed.

It’s a very positive feel-good album…
It took us three years to do this album. We do better when we’re all together. We were in five different states. It took so long but when it was all done, we realized it had come out good. People were saying it reminds them of Firefall with a new kind of twist. The other thing is that we knew we weren’t going to get any major radio play so we just played what we wanted to play.

Does it feel good to play live concerts again? Did you miss it?
Oh yeah, It’s great. We were out of it for a year and a half. We didn’t even get to see each other. We were doing zoom calls and all we were talking about was what was canceled, which was depressing. So it really does feel good now. I had carpal tunnel surgery and I was worried about that.

How does it feel after surgery?
I’m still not all the way back. I was talking to Scott Thompson of Pure Prairie League and told him I feel like I’m only 65% back but Firefall only requires 62%.

Talk about a firefall, are the fires still burning in Oregon?
Yes, still some fires burning, but not as bad as it was last year.

Do you miss Florida?
I’ve got a lot of family there still, being that I went to High School in Tampa.

Anyone on your bucket list to play a session for?
That’s a tough question cause I’d be happy to play with just about anybody. 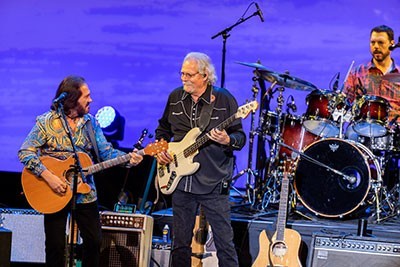 Who’s playing on your stereo this month?
One of my favorite artists is Bruno Mars. I love that guy. Before I joined Firefall I played in a lot of black funk and horn bands. I’ve had a love of R & B. I also like Ed Sheeran and I like Del Amitri from Scotland.

Want to tell us about your Use Your Gift Foundation that you founded with your wife to help young musicians get a start?
It is so rewarding. We had to cancel our annual Foundation show last year with Pablo Cruise due to the pandemic. We just played a show with Pablo Cruise in Virginia Beach and Cory came up and asked when we were going to do the show so we’ll try and book it for next year.

Seems like Pure Prairie League are great touring buddies. You’re on tour with them now and they seem like great guys.
Yes, we play with those guys all the time. We played with Poco all the time, until Rusty Young died. And then Paul Cotton died. Poco was one of my favorite bands and I saw them in Tampa while in High School. They were on a bill with Robin Trower and King Crimson. I was watching King Crimson who blew me away and I said, “how is Poco going to come out after this?” But they did and just ripped it up. They were awesome. Rusty Young was running all around the stage and it was such a great night.

Must be flattering with all those Yacht Rock bands playing Firefall songs.
We’ve done a few Yacht Rock concerts and we’ve done two of the 70’s Rock & Romance cruises and those are really fun. We had Grand Funk, Foreigner, War and Orleans, Ambrosia and everyone on one ship at one time. Everybody still plays great.

Love what you guys are doing and so glad you’re still at it. Anything else you’d like to speak about?
Well, since we were talking about the cruise, every morning I had breakfast with one of the techs from Little River Band and I just found out that he died today. Too many people dying.

Would you ever think Keith Richards was going to outlive Charlie Watts?
I think Keith Richards is going to outlive the world. I love that meme on Facebook where it says we need to start thinking about what kind of world we’re going to leave to Keith Richards.
The last group to perform on this triple bill was Orleans who closed the show with an entertaining performance featuring fan favorites, such as “Still the One,” “Dance With Me,” and “Love Takes Time.” It was a great opening night for a grand reopening.