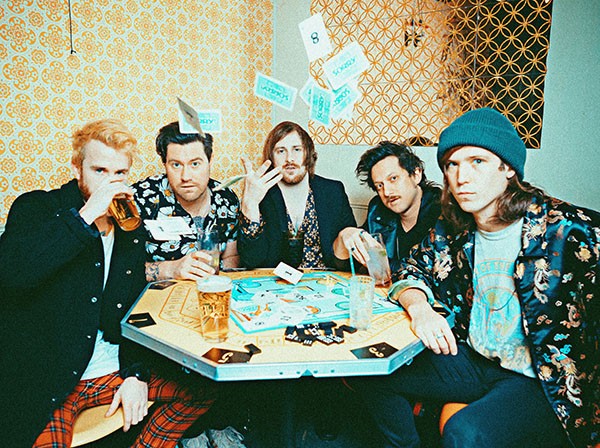 Many young adults leave high school with an uncertainty of what they want to do for a career. This was not the case for Lead Singer/Songwriter Kyle Morris and his friend/bandmate Guitarist Cole Male. Having the opportunity to catch up with this extraordinary talented band while their tour was postponed due to the COVID-19 pandemic, he revealed how The Unlikely Candidates formed over a decade ago, and how he, Male and the rest of the band (Lead Guitarist Brenton Carney, Bassist Jared Hornbeek and Drummer Kevin Goddard) work together to make their amazing Alternate Rock music.

SFL Music: So how did the band come together?

SFL Music: Who would you say are your influences?

Morris: We had a bunch. I mean, back in the day we were listening to a lot of Kings Of Leon and Weezer and Bright Eyes, Then we got into the Strobes and Young The Giant. There was a bunch that guitar, old rock stuff.

SFL Music: What influenced you to become a singer? Did you sing in school?

Morris: No. I never sang in front of anybody until that day. It was like, I think senior year of high school. Not even my family knew I could sing. So, I thought that maybe I would do that, but I never had any training or whatever. Basically, the first time I started singing for real was when I started this band.

SFL Music: Jared, how about you. Did you have any professional training?

Jared Hornbeek: Nope. I mean, I started playing music when I was about thirteen. I picked up a bass and joined a band. I was out in southern California. I joined a band. We were called Run Doris Run and we did some touring. At that point I was like yeah, I’m going to do this. It kind of consumed my life. I dropped out of high school and continued on, and that band stopped playing, and then eventually met up with Kyle and Cole and they needed a bass player.

SFL Music: How did you guys all meet up?

Hornbeek: They would come out to LA for recording sessions and they would stay at my parents’ house and sleep in the garage. We’d drink alcohol late into the night and hang out.

SFL Music: So, you guys just clicked and hit it off right away?

Morris and Hornbeek: Yeah.
Hornbeek: It’s like hey, we all love music. Let’s all have a good time. You know?

SFL Music: That’s cool. How does the writing come about as a band or are you the main songwriter Kyle?

Morris: We’ve done it every different way you can pretty much imagine over the years. It usually just starts with the music. Like you know, somebody will play something and I’ll kind of restyle over it until I get like some sort of melodic thing or lyrical thing that kind of connects, and then I’ll just build out from there. I’d say that’s about how it happens like 90% of the time. It starts with the music and then I kind of freestyle elements.

SFL Music: What inspires your songs?

Morris: I mean everything. A lot of its just like subconscious. I’m kind of just like vomiting stuff onto the track. It’s like whatever’s just in my head. Also, you know, can be whatever situation is just kind of like happening to me at the time. That’s kind of the stuff that comes out of your mind and stream of consciousness. I’ve written songs that have been based on poems or books or other people’s songs like the song “Call My Name” which is like an adaptation of The Tell-Tale Heart (Edgar Allan Poe), and there’s another song called “Best Things In Life Aren’t Free.” I was reading this book Tai Pei by Tao Lin. I put a lot of that imagery in there. So, a lot of books. A lot of just kind of whatever’s going on.

SFL Music: Are you an avid reader?

Morris: I try to always be reading something. Yeah. I’m sure there are people that are more avid, but yeah. There’s always at least one thing I’m reading.

SFL Music: Oh, that’s cool. Do you have a favorite type of subject to read about?

SFL Music: So, what can fans look forward to with your show?

Morris: It’s just a very high energy, like loud, rock ‘n roll show. Like it’s dramatic. It’s got a lot of passion. We’re definitely not shoe gazers so, we’re pretty much playing like we’re in an arena at any stage that we’re on. Like you kind of get that huge, big rock band vibrato. We’re really engaged with the audience too and just trying to make sure everybody has a really good time.

SFL Music: Is there anything else new coming out besides the video, your latest hit single “Novocaine.”

Morris: Yeah, I think we’ve got a song that’s coming out in the next month. So, I guess stay tuned for that. It’s something that’s going to be coming up on the horizon pretty quickly.

SFL Music: Does it have a title?

SFL Music: What inspired it?

Hornbeek: I don’t know. That was a weird one. On the last couple tours before we get up and perform, we’d be listening to a lot of jock jams, and I think that kind of inspired this song because it’s like a big, like pump up track. Kyle wanted to do something like very, I don’t know, shanty and anthemic but then, add a little bit of that like new age, jock jam feel so, it’s just kind of us filtered through, you know? One of those songs. Kind of how Queen did “We Will Rock You.” We wanted to do a little something like that.

SFL Music: So, you really like to get the audience engaged in the show?

Morris: Yeah, for sure.

SFL Music: What are you guys doing with this pandemic downtime?

Hornbeek: We’re doing a Flatten the Hump Day is what we’re calling it. Three PM Central time on Wednesdays. We’re gonna be doing a livestream and trying to keep that going every week until this all blows over and we’re all going to get back out on the road. We’re doing that, and I know the guys are all doing some writing back home on their own.

Hornbeek: A lot of cooking, (he chuckled).

SFL Music: So, what would you recommend to up and coming artists?

Morris: Just basically outwork everybody. There are so many people that are doing this that you really just have to outwork everybody. Like if you want to get ahead, you kind of have to put in the hours. Obviously, talents a big deal, but like being smarter and working harder pays way bigger than it is because there’s plenty of talented people that won’t make it. You just really have to put in more hours and try to learn from people that have come before you.

SFL Music: That’s good advice. Was there anything else you want fans to know?

Morris: Just that we’re gonna have more stuff coming out. Hang in there and hopefully we’ll see them all soon.
Hornbeek: Yeah, we’ll be hopefully back on the road after July is what everyone’s hoping for. So, keep your eyes and ears out for any concert dates coming up.

SFL Music readers keep a look out. You certainly won’t want to miss this talent!