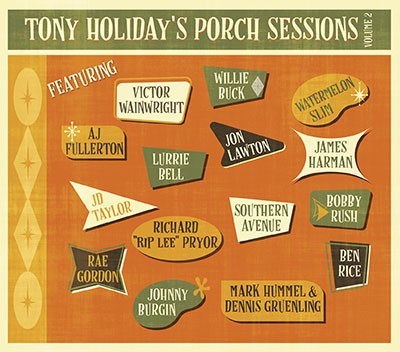 As you have probably figured out, by either being familiar with the 2019 Blues Blast Award nominated “Porch Sessions” or from the very hint giving words “Volume 2” in the title, this indeed is Tony’ Holidays 2nd release of this series.

Recorded by Tony Holiday, JD Taylor, Jon Atkinson and Matthew Wilson in six different cities “Porch Sessions Volume 2” features sixteen tracks, with fifteen different special guests and close to forty different musicians. As is generally the case with recordings of this nature, it’s difficult to comment on all the songs and even more difficult to mention all the players, as I usually like to do. With that said, I’ll stick to my usual format and tell you about some of my personal favorite tracks.

The disc opens with “She’s Tuff”, a Jerry “Boogie” McCain composition that is best associated with Kim Wilson and The Fabulous Thunderbirds. It features special guest Victor Wainwright on piano and vocals, his rhythm section – bassist Terrance Greyson and drummer Andres McNeill, and Tony Holiday on harmonica. As you’d expect, adding multi blues music award winner Victor Wainwright to anything can’t not sound great. His piano playing and Wilson-esque soulful vocal swag made for a great match with Tony’s outstanding harp playing.

Speaking of The Fabulous Thunderbirds, with Muddy’s “Honey Bee” featuring special guest Wille Buck on vocals, along with Kim Wilson on harmonica, Rusty Zinn on guitar, Troy Sandow on bass, Marty Dodson on drums and Robert Welsh on piano, I could almost say I’m hearing them right now. Needless to say, from a great rhythm groove, to killer lead and slide guitar licks, to fabulous (no pun intended) harp blowin’, this one’s got all the bases covered.

Along with this album being dedicated to him, “Going To Court 2” features Tony’s best friend and hero, the late, great James Harman as the songs special guest and vocalist. On what was one of his last recordings, James was joined by Kid Ramos and Landon Stone on guitar, and Tony Holiday on harmonica. It’s a six-and-a-half minute smoker with a dynamite meld of lead and rhythm guitar, killer harp leads and Mr. James Harman belting out his so cool/So. Cal style of blues vocals.

“Everyday I Have The Blues” (Peter Chatman) is an acoustic track done by a duo of legends who I can’t ever recall playing together – Chicago bluesman Lurrie Bell on vocals and guitar and California harmonica guru Mark Hummel on the harp. Here I am thinking of this as an unlikely pairing and here they are blowing my mind with killer Sonny Terry and Brownie McGhee type stuff.

Being very familiar with his father Snooky, this is my first – and quite pleasing – exposure to vocalist Richard “Rip Lee” Pryor, the special guest on his own “Brazilian Brothel”. With his most impressive vocal performance and killer harp blowin’ skills, this leaf did not fall far from the tree at all. Being backed by Danny Michel on rhythm guitar, Jon Atkinson tearing it up on the slide guitar, and Ronnie Smith on drums and Troy Sandow on bass being in the right rhythm spot, this all added up to one hell of a track.

Having worked on a few of his releases, this special guest is someone I’m very familiar with – “Rockin” Johnny Burgin. Playing guitar and singing the vocals on an original of his titled “Bad Bad Girl”, Johnny is joined by Tony Holiday on harmonica, Landon Stone on guitar and with this track actually being recorded on the front porch of his Greaseland Studio – porch provider, Kid Andersen on bass. With Kid creating the great rhythm vibe, Johnny and Tony sound as tight as lifelong band mates.

This one is titled “Find Me When The Sun Goes Down” and it features powerhouse Rae Gordon belting the hell out of the vocals on a song that she co-wrote. Short of calling her performance intimidating, let me just say that when Rae tells you to find her when the sun goes down, keep in mind that she isn’t asking….got that? Along with Jake Friel blowin’ harp, making the magnificent music behind Rae are Portland homies Ben Rice on guitar and Dave Melyan on drums.

Performing a song he wrote, the disc’s co-producer – JD Taylor – is the special guest on “Family Tree”. Along with Alex Taylor on guitar, JD – on vocals and harmonica – put on what I would call the quintessential porch performance: gravelly voiced, slow and moody singing of melancholic lyrics; drawn out blues chords blown on the harp; and laid back pickin’ on what you might hear the picker call the geetar.

There could not have been a more perfect way to close out this production than to hear Bobby Rush perform “Get Outta Here (Dog Named Bo)” (Emmett Ellis). On an absolute solo, the man who people can sit and listen to for hours on end, puts on one of his patented, attention commanding, smile inducing, jive talking, storytelling, performances. Ya just gotta love it.

To find out more about this and other projects by Tony Holiday, go to www.tonyholidaymusic.com. Should you have not yet received your copy of “Porch Sessions Volume 2” for airplay, please contact Betsie Brown at www.blindraccoon.com. Remember, wherever you go and whoever you contact, please let them know The Blewzzman sent you.