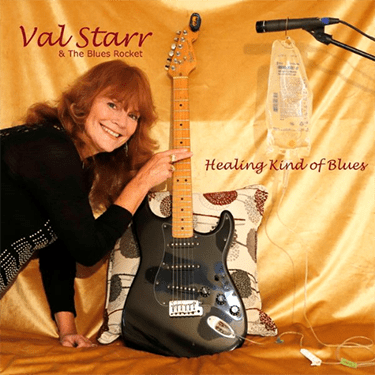 Following her successful top 10 charting 2020 release – “Lighter Side Of The Blues”, Val Starr wasted absolutely no time at all to release “Healing Kind Of Blues” – her sixth all original album.

According to Val, many of the songs on this release touch upon to the challenges, advantages and humor that surround aging; and the affection she has for the blues and its wonderful community……in other words, they’ll be songs that most of us will relate to.

Those of us who have visited Memphis – especially during the International Blues Challenge or the Blues Music Awards – will totally understand and wholeheartedly agree with everything Val says on “Ridin’ That Memphis High”. Although Val Starr gets the credit for writing it, the song is similar to a tale we’ve all told…..time and time again: Beale Street; Blues, BBQ; Vibes; Friendships; Camaraderie; and more. As a matter of fact, after many years of communicating with her via the Internet, Beale Street is where Val and I actually met for the very first time. Musically, John and Paul are doing a marvelous job on the moving rhythm; Tim and Frankie are fabulous on the guitar and harp leads; and Val, with her enthusiastic vocals, and a smile I can just tell she has on her face, is still – and always will be – ridin’ that Memphis high.

I found the lyrics on this track to be so interesting that I just have to share some of them with you:
“Jazz just gets inside your head and Rock will make you crazy;
Country makes you want to cry and Reggae makes you lazy;
But the type of song that makes you sigh, and makes you shake and shiver,
Baby is the “Slow Blues Grinder”……
Gospel makes you want to pray, from morning until night;
New Age takes you far away and Punk gives me a fright;
But the music that is my forte and brings my feelings out,
Baby, is the “Slow Blues Grinder”…….

Equally interesting verses contain references to Rap, Folk, Metal, Disco R&B and Pop. Vocally, I don’t believe I’ve ever heard Val Starr sound any better than she does right here. Oddly enough, for some crazy reason, her presentation brought thoughts of Shirley Bassey singing “Goldfinger” to mind. Since the songs have absolutely no connection or resemblance, I guess it was caused by Val’s similar intensity, range and amazing note holding ability. Musically, the song is indeed a slow blues grinder which means John, Paul and Todd were nailing the solid rhythm groove on the bass, drums and organ, and Tim was just killing with his scorching blues guitar licks. Back in the day when I used to be a nominator for the Blues Music Awards, it’s this type of blues perfection that would get my nod for “Song Of the Year”. Yes indeed, The Blues Rocket did rock it!

Being one who not only uses “The Blues Is My Passion & Therapy” as a signature in my emails, but has a T-shirt bearing the slogan as well – I firmly believe that Val hit the nail right on the head with the lyrics on “Healing Kind Of Blues”. Along with singing lead, the addition of her very own melodic and harmonic background vocals takes this one to a whole other level. Additionally, the extra added rhythm coming from Horraccio on percussion, and the sizzling sax leads Danny’s blowing – one of only two tracks they both appear on – take it another musical level as well.

As Val works her usual magic on vocals, “If You Ever Change Your Mind” features a handful of musical highlights, as well. First of all, it’s the other track on which you get to hear Danny’s smokin’ sax leads; led by John’s chest thumping bass lines, he and Paul are laying down some to the disc’s best rhythm; and special guest Debra Power – who is fabulous throughout – puts on a smile inducing high end, right hand piano solo that nearly steals the show. Another excellent track.

Yes Val, “Age Is Just A Number” and you are “only as old as you feel inside” are legitimate takes on aging. But I gotta ask ya – why does the number have to be so high and why do only us old people use those expressions? This fun song features a rompin’ rhythm from John and Paul; very lively harmonica leads by Frank; pretty cool guitar licks by Tim; tickling piano leads by Todd; and a collective uptempo vibe that would give even us baby boomers a desire to shake our aging booties.

Sassily using metaphors, similes, innuendos and downright truths, “Pretty Girl Blues” finds Val wondering why all the pretty girls always get their way? That said, as I look at the pictures of her on the front and back of the CD jacket, and recall the time spent with her in Memphis, I can honestly tell Val that many of those pretty girls will never have her fabulous smile. Another fun track with more of Val’s excellent harmony vocals.

Once again, Val emulates what all of us IBCers, BMAers, festival goers, blues cruisers, club dwellers, etc, feel about the people who surround us at those happenings – they are “Blues Family”. When Sister Sledge said it they meant it literally, but we are family as well. Of course, there is so much more going on, but the fact that this is the only track where you get to hear excellent work of Ilana Katz Katz on violin, means ya gotta give it a listen.

Other tracks on another excellent Val Starr & The Blues Rocket release are: “All About The Shuffle”; “Don’t Love ‘Em”; “Outside Looking In”; “Were Not Getting Older” and Get Over It”.

To find out more about Val Star & The Blues Rocket, just go to – www.valstarr.com – and should you have not yet received your copy of “Healing Kind Of Blues” for airplay, please email John Ellis at Jellis2003@yahoo.com. Remember, be it Val or John that you contact, please tell them the the Blewzzman sent you.