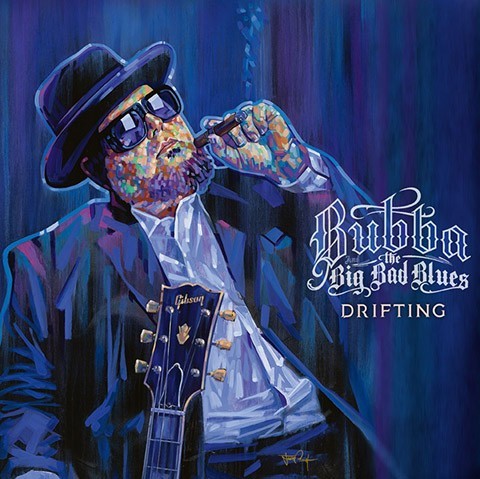 If you’re a part of the so cool SoCal blues scene, then you’re already a big fan of Bubba And The Big Bad Blues. Having been together for over ten years, the band’s played in pretty much all of the festivals you attend and the clubs you regularly hang in.

Although this powerhouse band leans more toward the rock blues point of the genres umbrella, the disc contains a good mix of soul, R&B, and enough straight up blues to make even this traditionalist a fan.

When your band includes a full horn section with two fabulous keyboardists there’s only one way to kick things off, and – in the style of B. B. King and his orchestra – that’s with a full blown swinger featuring them all. This one’s titled “I Want To Make Love To You Baby” and with Tony and Mike B. all over that foot tappin’ rhythm groove on the drum and bass; Mike F. and Rick lighting it up on the organ and piano; Richard, Joe and Les, making all those bands that don’t have a horn section wishing they could, blowing fire out of the trombone, sax and trumpet; and Christopher belting out some soulful vocals and killing on the blues guitar leads; that’s exactly what Bubba And The Big Bad Blues did. Most impressive opening track indeed.

“Drifting”, the disc’s title track, features most of the above ensemble but in a toned down, melancholic mood. With occasional sullen horn, organ and guitar leads, the song pretty much showcases Christopher’s soulful and emotional vocal abilities as he tells the mournful tale of someone who is so down and out that he believes he hears the Lord’s voice calling him. This is the kind of song I generally like to say has “song of the year” credentials, that’s how good it is.

“Right is right and wrong is wrong,
I should not have to tell you in this song.
Things are bad and it could get worse,
I need your help to put things in reverse”…..

are just a few of the many powerful lines Christopher uses in his plea for everyone to “Do What’s Right”. Not only do I love the message this song’s sending but I love the fact that it’s being sent with very matter of fact phrases (as you will also appreciate when you give the song a listen). Musically, this smokin’ blues rocker is as powerful as its lyrics.

Stop and think for a minute what life would be like if every time you ventured into a new personal relationship you had to fill out a resume similar to the way you now do when you seek a new job. Making that scary thought even scarier is the fact that your new significant other has the right to contact your old significant other. For example, if Bubba were asked for his input on his ex he’d probably tell her new suitor that “She cheated and lied; stole from his wallet and stole his guitar; she drank all his money and crashed his car; and she snores like a flathead Ford”…..for starters. Then, after mentioning a whole lot more of her characteristics, he closes with “She’s Your Problem Now”. Yep, it’s surely a scary thought. On the other hand, the accompanying music might make you want to at least dance with her.

If there was ever a title for a song about road rage, “I Own The Road” would be as good as any. Additionally, if there were ever a fast and furious musical accompaniment for that song about road rage, this is also it. Lastly, should you ever want to frantically chase another car down the road at high speeds to let the driver of that car know you are really pissed off, roll all your windows down and blast this song as loud as you possibly can. Of course, this is all being said in jest and the contents of this song are for entertainment value only and should never be tried at home…..although I’m sure I have. With everyone else in the band in all out pedal to the metal mode, Rick is in Jerry Lee on steroids mode. As I may have already indicated, this one rocks!

Returning home late from a job that sucks and finding: Amazon boxes all over the house; a wife who’s already drinking; kids so dumb who look like the delivery guy; a daughter who says “so what, mom does too” when referring to the pictures she has all over the web; are just a few – and I do mean few – of the many reasons Bubba needs to “Lose These Blues”. Musically, with some of Bubba’s best guitar work, a powerful rhythm, and blazing organ and sax leads, this shuffle is one of the disc’s best.

The disc closes with it’s most beautifully written and most beautifully performed song. It’s a ballad called “My Love” and it features Christopher lamenting over a lost love. It’s the kind of song that as you listen to its lyrics you find yourself hoping it’s not a real life tale, but yet it’s heartfelt and emotional vocals make you think it is.

Other tracks on Drifting include: “Helping Hand”; “Amongst Butterflies”; “Keep Moving On”; “I’ve Been Down”; and “If You Need Me”.

In the opening paragraph of this review I mentioned that the blues community in Southern California is most likely already familiar with Bubba And The Big Bad Blues, and now I’m very strongly suggesting that other blues communities need to do the same.

To find out more about Bubba And The Big Bad Blues, visit the band’s website – www.bubbablues.com – Peter “Blewzzman” Lauro