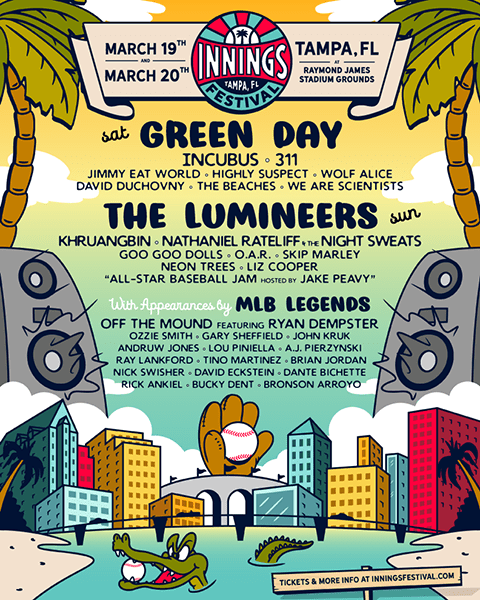 After holding its own in Arizona since 2018, the brilliant team behind the Innings Festival decided to add a second show in Tampa, Florida this year. Why Tampa? Florida is one of the two spring training states and Tampa is the perfect spot for Innings Festival with its mixture of music and baseball set right in the middle of spring training.

For the inaugural Florida line-up, they really didn’t skimp on the talent. Taking place the weekend of March 19th & 20th myself and 30,000 other attendees got to see 18 bands play over the two days. Saturday’s lineup included Green Day, Incubus, 311, Jimmy Eat World, Highly Suspect, Wolf Alice, David Duchovny, The Beaches & We Are Scientists. If that wasn’t enough Sunday had The Lumineers, Khruangbin, Nathaniel Rateliff and the Night Sweats, Goo Goo Dolls, O.A.R., Skip Marley, Neon Trees, Liz Cooper and the All-Star Baseball Jam that included a line up of baseball’s best musicians playing together.

The most unique part of the festival throughout both days was the rotating line up of retired baseball players. You were able to chat and get autographs. There were also batting and pitching cages, for you to show off your skills and get playing tips from baseballs past icons such as Ozzie Smith, Gary Sheffield, Andruw Jones and Bucky Dent.

On a personal note, I was really excited to get to chat briefly with Bucky Dent. A little over 30 years ago as youngster I was able to spend a week at his baseball school in Florida and has so much fun. I was able to reminisce about my week there with its namesake. Pretty cool for this 25, er 35, (FACT CHECK) 44-Year-old.

Kicking off Saturday’s lineup was We Are Scientist with their fun energy, they were the perfect band to start the festival. Followed by The Beaches, an all-female quartet, who released “Future Lovers” last year, out of Toronto, were making their first trip to Florida and put on a great set I highly recommend checking them out when you can.

Up next was the biggest question mark of the day, David Duchovny! Yes, the one you know as Fox Mulder or Hank Moody. On this day he was doing his best role as a rocker and namesake of the David Duchovny Band.

The rest of the afternoon and evening was filled with exciting and familiar rock and roll from Wolf Alice, Highly Suspect, featuring the topical “Fuck Putin” written on Johnny Steven’s guitar and followed by very energetic and positive sets from rock veterans Incubus, 311 and Green Day.

Sunday’s lineup started off right with Liz Cooper and Neon Trees. Neon Trees, were my biggest surprise of the weekend. I have always been a fan of the band but lead singer, Tyler Glenn has taken that next step to a top-notch front man, every set of eyes and ears where on their stage. They really entertained the crowd.

The middle of the afternoon included Skip Marley, O.A.R. and Goo Good Dolls. These three sets were filled with good vibes and sing alongs – a perfect fit for the beautiful early spring Sunday. As the sun started to set, the blues rock hurricane also known as Nathaniel Rateliff and the Night Sweats kicked things off. One of my favorite newer bands never seems to disappoint. Full of raw energy. with great harmony. There’s something about them that makes you want to watch them, add it to your list – you can thank me later.

Closing out Sunday night was the genre bending musical mix of Khruangbin and the folk-rock outfit known as The Lumineers.

Looking back, I don’t know what more I could have wanted from this weekend. Great music, delicious food and meeting baseball heroes… Is it too soon to be looking forward to next year?