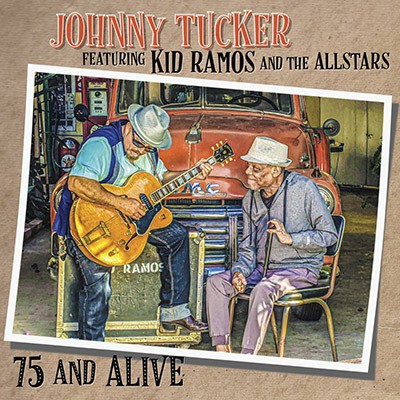 Let me cut right to the chase here, “75 And Alive” by Johnny Tucker feat. Kid Ramos And The Allstars, is the kind of stuff us purists thirst for. If this release isn’t on the ballot of every award category that includes the words “Traditional Blues”, then the organizations sponsoring those ceremonies need to strongly consider revamping their nominating committees. As a matter of fact, back in the day when Mary4music was giving out “The Blewzzy Awards”, I’d tell you that with five months left to go in the year, this is the one to beat.

For all intents and purposes, I could easily go straight down the line as I mention the songs, because each and every one is one of the disc’s highlights. However, like it or not, I’m going to have to do some editing.

Right out of the gate the guys come out smokin’ on a swingin’ shuffle titled “All Night Long, All Night Wrong”. Exactly two seconds in, with Kid working his usual magic on the guitar; and Ron and Carl’s sax and piano leads adding fuel to the smoldering rhythm that John and Jason are laying down; the guys are right at the top of their game. At this point, the song that would have been a killer instrumental in itself, was taken to a whole other level once Johnny started belting it out on the vocals. Just as things get really cooking Johnny lets out a loud howl, and I’ll be damned if he didn’t take the words right out of mouth. Interestingly, the very first line of Bill Dahl’s liner notes states that….. “Voices like Johnny Tucker’s barely exist anymore in today’s guitar dominated blues world”…..Then you hear him sing and you’re thankful his does.

Shortly after it registered that “There’s A Time For Love” was going to be a slow and bluesy ballad, I immediately started it over so that I could give it the attention that these kind of songs demand – and receive – from me. That’s when I noticed that it was six minutes long, and with this being the kind of stuff I can listen to all night long, the smile on my face broadened. Somehow, in someway, I feel that without saying a word about the instrumentation I kind of just told you all about it. Yeah, I know you got it.

Staying right in my wheelhouse – and obviously in theirs, as well – the guys are nailing it on this old-school fifties style R&B number called “If You Ever Love Me”. Being led by a fabulous Fats Domino vibe Carl’s got going on at the piano, the rhythm section is in a serious “stroll” inducing rhythm – I can even see the line forming from here. Letting out several more howls and saying “I liked-ed that, I liked-ed that” at songs end, even Johnny himself was quite crazy about this one. Another WOW! track, for sure.

In addition to styles of the genre having words like rock, soul, etc in front of the word blues, having cities like Memphis, Texas, etc. in front of it is also quite common. While listening to “Can’t You See”, if I gave a nickel to anyone who didn’t think Chicago, I’d be a poor man for sure. In addition to this one featuring Johnny growling and howling out the blues while making an occasional trip to the vocal basement; lots more bottom coming from the rhythm section; and the typical guitar and piano leads you’d expect (although Kid and Carl are certainly not typical); the track also features Bob Corritore wailing on harp. So, this NOT being a review of his, I won’t get too carried away but, taking a look at all of the artists he’s featured on his countless “Bob Corritore and Friends” CDs, a tip of the hat is surely deserved. This cat knows his traditional blues.

Although Johnny is indeed a master vocalist, I appreciated the fact that with all the amazing musicians gathered to back him up, that the producers saw fit to included a pair of instrumentals. The first, and more ambitious of the two – which are both written by Kid – is titled “Snowplow”. It’s an up-tempo track with Carl, John, and Jason in a dynamic rhythm groove, and with Kid and Ron laying down and blowing out, smokin’ guitar and sax leads. The second is titled “Hookline” and it’s a bit more of a laid back shuffle that features some fabulous slide guitar by Kid; great high end Jimmy Reed style harmonica blowin’ by Bob; more great high end, left hand, piano leads by Carl; and a perfect rhythm groove by John and Jason that seemed to keep everything in check.

So with six other outstanding tracks that I can tell you about, I honestly don’t see a need. Most of you were already wanting to get your hands on the album while reading my opening paragraph and the rest of you were probably ready once you got to the paragraph listing the credits. Had I been the reader and not the writer, that sure would have done it for me.

With that said, those other outstanding tracks are: “What’s The Need”; “Treat Me Good”; “What’s On My Mind”; “Dance Like I Should”; “Have A Good Time Tonight”; and “Gotta Do It One More Time”……which I’m hoping means Johnny’s already got his mind set on release number three.