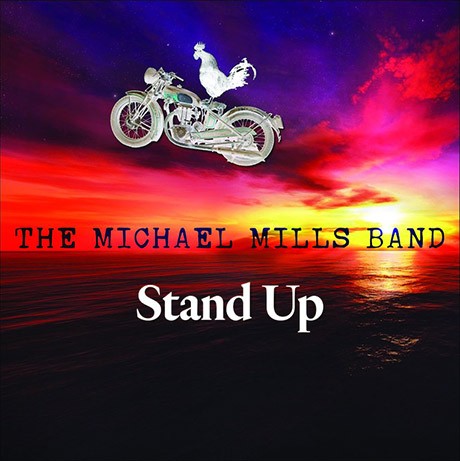 The Michael Mills Band, based out of the blues rich Huntington Beach, CA area, consists of: Michael Mills on rhythm guitar and vocals; Jesse Godoy on lead and slide guitar; Scot Campbell on bass; Ron Ravicchio on drums; and Mark Weisz on Hammond B3 organ.  Joining them are: Eddie Hagihara, Ron Robbins and Jim Butler on saxophone; Chef Denis on harmonica; Albert Margolis on piano; and Jackie Simone Elliott and Cydney Wayne Davis on background vocals.

Although they released a five song EP some time last year, “Stand Up” is the first full length release from The Michael Mills Band.  Covering all the styles of blues, all twelve of its tracks are original songs with eleven of them being new for the project.

“Stand Up”, the disc’s opening and title track, kicks things off in grand fashion.  It’s an impressive blues rocker doing exactly what an opening track should do by featuring the nucleus of the band, all on top of of their game.  The tone has indeed been set.

You’ll not only notice it but you’ll “Feel It” as the band establishes their versatility by very comfortably switching gears into this absolutely beautiful ballad.  Everything from the soulful and heavenly lead and background vocals; to the delicately intense rhythm; to the sensitive guitar chords; to the interweaving of the B3 organ and piano; are all amazingly masterful.

On “I’m Not Sorry”, it took all of three notes of Jesse’s opening guitar intro for my ears to perk up and my brain to think “oh yeah, here comes some serious slow blues”.  Then Mark so appropriately sets just the right heartbeat to the song with the Hammond organ; Scot and Ron fall right in with an easy-going rhythm; Michael starts emotionally belting the hell out of the songs’ melancholic lyrics; and here I sat – per my taste –  listening to what I believe will be the disc’s best track.

“My New Woman”, the only track that appeared on the band’s earlier EP, is definitely one for the movers and shakers.  Michael’s melodic and vibrant vocals; Jesse’s pickin’ and slidin’ on the acoustic guitar; Chef’s howlin’ harp leads; and Albert’s honky-tonk piano playin’; all give this one the feel of a country blues jamboree.

While Michael’s singing “‘My Baby Drives” like she’s running away from the law”, the band’s keeping a pace that sounds like they are, as well.  On this blues rocker, the rhythm is ferocious, the harp leads wail and the very Elmore James sounding slide guitar work is amazing.

Being the funkiest of the lot, ya know the rhythm cats are gonna be all over “Big Black Car”.  That said, it’s the only track that features Eddie Hagihara blowin’ the hell out of several tenor sax leads and, although there are many more, that’s reason enough for listening.

When Michael Mills and I first started conversing, back in July of 2019, I recall him explaining to me that he was new to the blues.  I also recall wanting to reply with “Yeah, right!”.  Give this track a listen and “I Know” you’ll agree. This kind of straight up, gut wrenching blues is what you’d expect to only hear from seasoned blues veterans.

Other tracks on “Stand Up”, a disc that I feel establishes The Michael Mills Band as a force to be reckoned with in the genre, include: “Real Good Thing”; “One More Alone”; Love Is Ahead Of Me”; “You Can’t Hide”; and “Chasing The Blues”.

To find out more about Michael Mills and the band, please go to    www.michaelmillsband.com; As usual, whomever you talk to, please tell them the Blewzzman sent you.  – Peter “Blewzzman” Lauro – Blues Editor @ www.Mary4Music.com