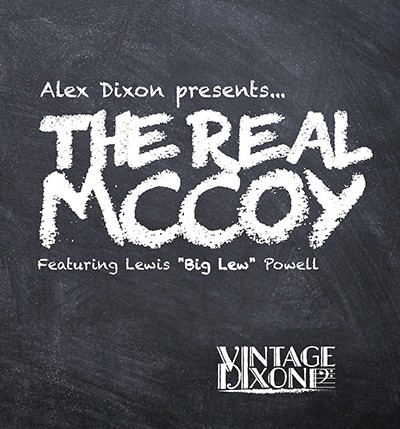 There is so much I can tell you about Alex Dixon – Willie Dixon’s grandson –  and Dixon Landing Music; and with all the wonderful and valuable information provided on the two sided one sheet enclosed with the disc, I could fill up paragraph after paragraph telling you about what I just read as well.  However, since all that is available online, I’d much rather let you read about it yourselves and go straight to telling you about the album and music I just heard instead.

“The Real McCoy” is the third release on Dixon Landing Music and I’m honored to say that I have had the pleasure of writing about all three.  Of the disc’s eleven tracks, six are Alex Dixon originals/collaborations and five were written by or collaborations of gramps and uncle Wolf – that would be Willie Dixon and Chester “Howlin’ Wolf” Burnett.

In addition to being an extremely talented bunch, many of the musicians joining Alex Dixon – on bass – are lifelong friends who grew up together on the south side of Chicago as well.  They include: Lewis “Big Lew” Powell on vocals; Alvino Bennett on drums and vocals; Steve Bell and Sugar Blue on harmonica; Melvin Taylor and Rico McFarland on lead and rhythm guitar; Gino Matteo on slide and rhythm; Joey Delgado on rhythm guitar; and, Leila Dixon and Whaia on background vocals.

The opening track – “Nothing New Under The Sun” (A. Dixon) – was recently released as a single on the same date (Jan. 7) that the Muddy Waters classic “Hoochie Coochie Man” (W. Dixon) was released, back in 1954…..and that’s not the only similarity.  Just like Muddy did on that Chess release, “Big Lew” is belting and growling the hell out of the vocals; just like Little Walter did, Steve Bell’s blowin’ some serious blues on harp; just like Willie Dixon and Elgin Evans did, Alex Dixon and Alvino Bennett are rockin’ the rhythm; and just like  Muddy and Jimmy Rogers did, Melvin Taylor, Gino Matteo and Joey Delgado are killing it on the guitars.  That’s what traditional blues sounded like then and thanks to these cats, that’s still what traditional blues sounds like now.  Don’t fix it if it ain’t broke!   The track also features a fourth generation Dixon – Alex’s daughter and Willie’s great granddaughter, Leila, making her recording debut on background vocals.

Another Willie Dixon Classic – which Buster Benton had a big hit with in 1973 – is “Spider In My Stew”.  Other than the fact that this time it’s Sugar Blue and Rico McFarland laying down the killer blues licks on the harp and guitar, not much has changed.  Just like when Willie said “Chicago is loaded with the blues”, this track is, as well.

There are certain claims that certain legendary blues men can make that no one would dare dispute. When Willie Dixon says “I Am The Blues” who’s gonna tell him he’s not?  When John Primer claims to be the “Real Deal”, who’s gonna tell him he isn’t?  Along those lines, Lewis “Big Lew” Powell has me thinking that when it comes to singing the blues, he may just be “The Real McCoy” (A. Dixon).

So here I am, four tracks into the disc and I’ve had something to say about all of them.  If I’m not careful, two things could easily happen: the first is that as impossible as it seems, I’ve got to become a bit more selective or this will be a very long read; and secondly, with the abundant amount of incredible tradition blues, I’d hate for my descriptions to become redundant.  That said, this being a track that features harp master Sugar Blue at his very best, makes telling you about “My Greatest Desire” (A. Dixon) a public service announcement.

The next two tracks are titled “Howlin’ For My Darling” (W. Dixon & C. Burnett)  and “Groanin’ The Blues” (W. Dixon) and on them both, “Big Lew” clearly testifies that when it comes to howllin’ and groanin’, ain’t nobody got nothin’ on him.  The latter track features Melvin Taylor, a long time favorite of mine, on the disc’s most scorching guitar solo.

Hands down, the disc’s smoker is “Chi-Town Boogie” (A. Dixon & L. Powell).  Other than Alex, Lew and Alvino occasionally harmoniously shouting out the songs name from time to time, the track is basically an instrumental which features everyone in all out jam mode.  Think “Whammer Jammer” – but with  Steve Bell doing the renowned harp work – highlighted by three guitarists.

Other tracks on what I’m calling a must have CD that’s highly likely to appear on “Best Traditional Blues” ballots include: “When I Make Love” (W. Dixon); “10,000 Miles Away”  (A. Dixon/A. Bennett/ L. Powell); and two bonus tracks: “I Want To Be Loved” (W. Dixon); and the true instrumental version of”Chi-Town Boogie”.

For more information, and to hear some music clips from “The Real McCoy”, just go to www.vintagedixon.com and you can also check Alex out at www.facebook.com/alexdixonbandvintagedixon/ – Peter “Blewzzman” Lauro