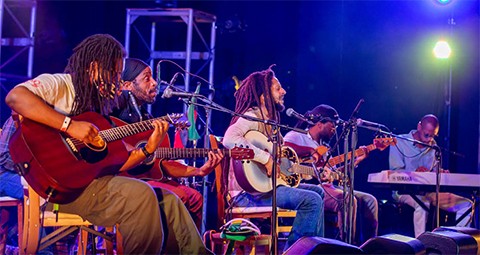 “This piece is dedicated to the memory of a revolutionary and a pioneer in reggae music, the Original Wailer who helped pave the way for generations to come.” -David Shaw

Amid a year-long pandemic, the team at Old School Square in Downtown Delray Beach, along with independent promoters T-Presents and House of Parnes are providing a unique musical experience that is both safer and more enjoyable than crowding into a throng of a mask-less crowd, or enjoying a livestream event from the confines of one’s own home. On Saturday February 27, the latest episode of trying to revel in live music festivities included a second sold-out, exclusive collaboration of prominent reggae legends…The Wailers (2021 Grammy nominees for their newest album in over 25 years, One World) featuring Julian Marley, and Gary Dread as the opening act. Their previous show (with Drifting Roots) at O.S.S. in February was so popular that the band and showrunners decided to give it a second go.

“Live music can create joy and connectivity. Throughout the pandemic, people have been isolated and lacking interaction as it has been difficult to do safely,” said independent promoter David Parnes. “It’s the reawakening of the live music scene in South Florida for everyone. The Old School Square team put together a courageous plan last year to try and bring back live music in a safe way through pod seating, before anyone in the state was doing it. As a promoter, it is of the utmost importance to me that any show I’m involved in during this time is done in a way that is safe for both the fans and the artists. The outdoor pod setup at Old School Square successfully accomplishes that goal. I’m proud to have my name on these shows and bring amazing artists to South Florida while respecting everyone’s health. Our team is very hopeful that as the pandemic weakens, we will be able to welcome additional people to future shows and that more great bands will feel comfortable touring again.” 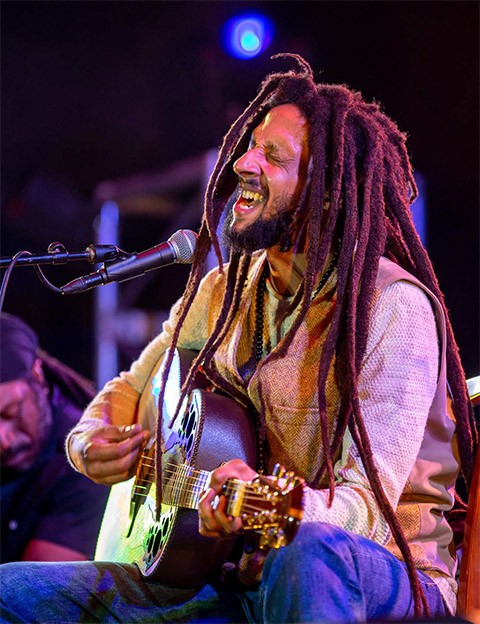 Headlining on a perfectly beautiful moonlit night in the middle of Downtown Delray Beach was a semi-acoustic musical group entwined in generations of the most famed Jamaican reggae artists of all time. One of Bob Marley’s most popular sons, Julian, took the lead on acoustic guitar and vocals. He was surrounded by some of the most talented musicians in reggae history. Aston Barrett Jr., leader and drummer of the current Wailers’ lineup, took his retired father’s, Aston “Family Man” Barrett, place on bass. Barrett Jr. also co-produced their Grammy-nominated album One Love with Emilio Estefan. Longtime Wailers guitarist Junior Jazz joined the renowned ensemble on acoustic guitar. Marley and the Wailers’ members were accompanied by a Kymani Marley guitarist named Richie, The Resolvers percussionist Speedy and Barrett Jr.’s cohort Kaya, rounded out the rhythm section on the djembes and a myriad of other instruments. Jaime Hinckson, the final member of this epic collaboration, is a remarkably talented jazz pianist and composer who performed astounding improvisational waves on the keyboard.

The show itself was a sporadic medley of original Julian tracks, as well as Bob Marley and The Wailers’ more recognized hits. While Julian fronted the featured act, The Wailers and friends provided a variety of semi-acoustic styles that incorporated every Caribbean island culture: from reggae and dancehall to calypso and salsa, along with country, honky-tonk, soul and jazz. Julian performed several newer hits from his 2019 release, As I Am, including “Hey Jack,” “Broken Sail” and “Cooling in Jamaica.” Older hits included “Violence in the Streets,” with Julian puffing into a Rasta-colored melodica. As a son of the greatest legend in reggae… AND having his father’s band join him, it was a necessity to cover some classic Bob jams, in which the entire crowd sang along throughout the entire set.

Julian Marley and The Wailers achieved an astronomical performance, despite going semi-acoustic. The covered an enormous range of Bob’s songs, including “Soul Shake Down Party,” “Crazy Baldheads,” “So Much Things to Say,” “Running Away,” “Stir it Up,” “Get Up Stand Up,” “Exodus,” “Rainbow Country,” “Redemption Song,” “Three Little Birds” and a “Roots Rock Reggae” medley. It was truly a phenomenal spectacle to witness such a historic line-up sell out two shows during a global pandemic and still feel utterly safe in the open space of one’s own pod. 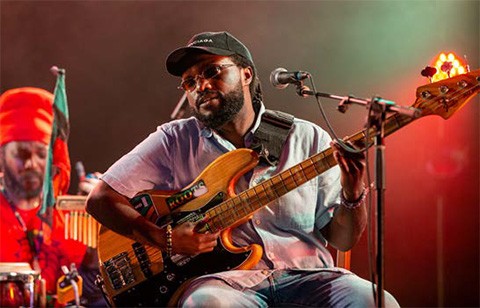 “To have two sold out shows during a pandemic with complete regard for their safety and health shows that people are more than ready for the return of live music on a full scale,” legendary South Florida MC, event DJ, radio host and reggae promoter, Lance-O of KulchaShok Muzik, remarks on the unfathomable feeling to selling out the two shows. “Doing the semi-acoustic show also added a twist on the music that was very refreshing with Jamaican legends. Their live show puts them on the musical map as the top performing act in reggae music again. It is the band that has created history and is now the future of reggae music with this revitalized lineup. And they have a synergy that is unmatched!”

Not only was this crowd honored with the presence of multi-generational original reggae icons, they were also graced by the positive and conscious legend that is Gary Dread, a contemporary reggae-rock icon in his own fashion. Gary “Dread” Jackson is the drummer from one of the most popular modern American reggae-rock bands, The Movement, and is also a solo conscious rap artist and singer. He strutted and sashayed across the O.S.S. Pavilion outdoor stage, as masked patrons found their way to the pods that would safely socially-distance themselves from their fellow concertgoers. They could remove their masks as soon as they entered a pod. Gary serenaded the audience in his dancehall with roots-reggae, and hip-hop stylie. The artist preached positive messages and praised life, healthy living, and love in jams, like “Live 4 the Right,” “Step Away,” “Food For Ya Brain,” “Lifted, Stay Close” and “Coming Home.”

Old School Square ain’t stopping yet! They have a myriad of different events featuring different acts in numerous genres. Lookout for some upcoming events listed below that will get you out of your home. You too can see some amazing acts with elegantly organized safety protocols to keep you feeling secure… while having an absolute blast! 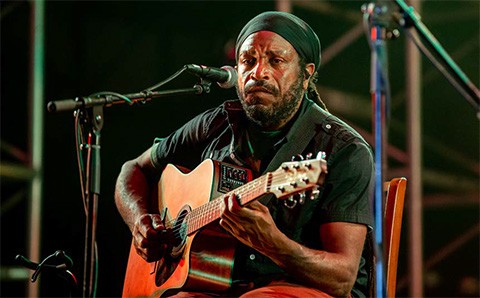 Future shows coming up and on sale now:

May 21: St. Paul and The Broken Bones (Southern/Soul) with The Ries Brothers (Rock/Blues/Funk/Reggae/Pop/Alternative Rock)