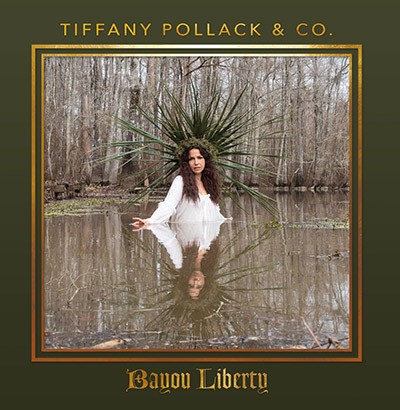 Prelude
So it’s January 29, 2020 and I’m at the Atomic Rose in Memphis, TN, emceeing the “Roots & Blues” Showcase presented by Blind Raccoon and Nola Blue. Within minutes of introducing Tiffany Pollack & Co. I was in awe. With a fabulous stage presence and a commanding voice, this gorgeous, petite, powerhouse had total control of the audience. I turned around to Betsie Brown, Sallie Bengtson and Debra Clark and said, “How did I ever let her debut CD go under my radar and not do a review of it?” Without uttering a word between them, I’ve got to tell you, if synchronized eye rolling was an Olympic sport, I was just told off by the gold medal winners. As it turned out, that 2019 release – “Blues In My Blood” – with her cousin Eric Johanson, received several album, artist and song awards from various music organizations. The line on the one sheet that states “The album turned heads across the blues world” could have easily been preceded by “except for one”. Too funny. That said, the Blewzzman does not make the same mistake twice.

Review
Although the ensemble of that first release were not billed as Tiffany Pollack & Company Co. that doesn’t change the fact that “Bayou Liberty” is indeed her second release. For the project, Tiffany – on vocals, ukulele and slide guitar – is joined by Brandon Brunious on guitar; Stoo Odom on bass; Eric Lewis on pedal steel; Christopher Johnson on saxophone; Ian Petillo on drums; and the disc’s producer, label mate John Nemeth on harmonica. “Bayou Liberty” contains twelve Tiffany Pollack originals.

During his only performance on the disc, John Nemeth makes his presence known right out of the gate. His harp blowin’ kicks off the opening track – “Spit On Your Grave” – and with several back and forth exchanges with Brandon’s hot guitar licks and Christopher’s smokin’ sax riffs, his stinging leads are highlighted throughout the track. Vocally, this may be some of the bluesiest I’ve heard Tiffany sound. She’s right down there with the down and dirty groove the band is in and as nasty as the songs title implies. Strong opener!

Running into an ex while at a barrelhouse on the bayou, Tiffany quickly makes it clear that she’s just there for the “Crawfish And Beer”. With a sassy tone, a terrifying attitude and lines like “I didn’t come here to hear your shit, I didn’t come here for you to be a prick”, she pretty much made sure this jerk took the hint to do some serious unsocial distancing. Musically, right where the locale calls for it to be, the band is in just the right swampy groove.

With her amazing vocal skills and versatility, hearing Tiffany so beautifully sing “Mountain”, could easily lead listeners to believe her roots were in country. Although we all know that’s not so, that ability is certainly a nice ace to have in the hole. That said, with Stoo and Ian in that continual trail ridin’ rhythm tempo on the bass and drums; and Eric incorporating that fabulously familiar twang of the pedal steel; the same could be said for the band.

Remember that sassy tone and terrifying attitude Tiffany used to scare the crap out of that dude in that bayou barrelhouse? Well like others she refers to in this song, he most likely thought she was a “Sassy Bitch”. As a matter of fact, by songs end you’ll discover she’s actually a proud sassy bitch. Hey, if you’ve got it, flaunt it.

With a Mardi Gras vibe, the band takes us straight down to Bourbon Street on
a song titled “I’m Gonna Make You Love Me”. As cute as she is and long as she uses lines like “You’re gonna lose your mind, I’m gonna make you unwind”; “You’re gonna beg for more, when I shut that door”; “I’m gonna wear you down, I ain’t clownin’ around”; and leaves out the part about being a sassy bitch; I’m thinking making this guy love her shouldn’t be so hard. A fun and definite dance floor filling song.

This is one of those songs that a Martina McBride, a Miranda Lambert or for that matter, a Tiffany Pollack, could easily have a hit with on the country charts. It’s a beautifully written and beautifully sung balled called “Baby Boys. Although the band is doing a fabulous job behind her, I just couldn’t shake the idea of hearing this done by Tiffany as an acoustic solo out of my mind. Her flawless voice and equally fabulous vocal range just totally swept me away. Hmmmmm…….song of the year material? Oh yeah!

I actually had another song I intended to touch on but for strictly selfish reasons, I’m just going to close it out while listening to “Baby Boys” a few more times.

Other tracks on “Bayou Liberty” – what may very well be another award winning release for Tiffany Pollack – include: “Colors”; “My Soul My Choice”; “Devil And The Darkness”; “Hourglass”; “Livin’ Like Me”, and “Do It Yourself”.

To find out more about Tiffany Pollack just go to her website – www.tiffanypollackandco.com