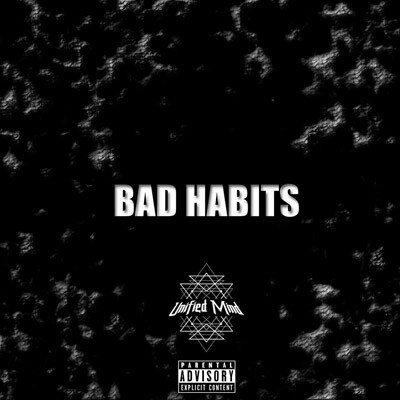 South Florida’s own powerhouse collaborative project, Unified Mind, recently released their brand-spankin’ new reggae rock/rap/nu metal/punk rock EP, Bad Habits. The EP, released at midnight on New Year’s Eve, is not only a mixture of several genres local South Florida bands are notorious for, but also a fusion of several up-and-coming local reggae rock bands. The trailblazer behind this project, Tyler “G” Giddens, front-man for Vibes Farm (and formerly LFTD LVLS), not only co-wrote and produced this amazing EP from his home studio, but also laid down almost every instrumental track on each of the five songs on the entire album, and created the album artwork! Giddens was joined by some of his closest friends and musical cohorts to produce these tracks, with Mario DeMoura on vocals that ranged from harmonies, to solo rap verses, and choral hooks, and fellow Vibes Farm bassist, Ryan Jackola and former drummer, Joe Cole.

Their current live line-up includes Giddens on lead guitar and lead vocals, DeMoura (vocalist of duo Home Grown Rebellion) on lead rap vocals, Giz Forte (current Vibes Farm and Reefers drummer) on bass, and Travis Schmeider (Fireside Prophets and Home Grown Rebellion drummer) on drums. Their live debut featured a medley of musicians joining the ranks for the open jam invite. On how this collaborative project started, where their unique amalgam of sound stems from, and how the response to this new creation was received, Giddens had this to say:

“Unified Mind started as an open invitation to local musicians I wanted to work with or get more of a collective of the community on a record. Founders Mario DeMoura and I started off the collaboration recording at my home studio, where I recorded all the instruments myself, along with a few instruments done by Joe Cole and Ryan Jackola. We gained the attention of our peers and welcomed Rocky Rucker and Travis Schmeider (from local bands) into the mix for our first show at Crazy Uncle Mike’s in Boca Raton, back in October 2019.”

“Our sound is pretty unique, mixing genres with others genres to make something new almost like alchemy. I’ve always been a rapper even before doing reggae and I was also a metal head as well, so having love for those genres and aspects around them, I started to write heavier riffs accompanied by a smooth live rap-style drums, with cool reggae break downs…which you can hear in all of Unified Mind’s music and especially the Bad Habits EP.”

The first song on Bad Habits EP is the title track and opens with one of those heavier riffs Giddens mentioned, along with drums to match. DeMoura follows the hard rock intro, spitting swift rap verses before being joined harmoniously for a slowed down bridge with Giddens and then DeMoura’s fast-paced chorus. Giddens contributes a verse of his own and his signature hard, but immensely smooth guitar solos to complete the song as the bridge and DeMoura’s chorus repeats. This song in particular resonates with the distinctive South Florida heavy rock sound that fits in perfectly with reggae rock, and will get fans of the genre bangin’ their heads and moving to the beat when they hear this song live. This jam is very reminiscent of late 90’s nu metal/rap bands like Limp Bizkit and Linkin Park and surely sets the tone for this short EP to be more than just your typical island and pop-style reggae rock album.

The transition to the next song “Edibles,” is a flowing hip-hop instrumental repetition that sounds like horns but is more than likely looped on the keys, along with the boys tracking a conversation about splitting an edible. Giddens raps the first verse with DeMoura’s deep produced vocals providing harmonies on stressed lyrics. They both go back and forth on a very catchy chorus and DeMoura follows with a slowed down and psychedelic verse before picking the pace back up again on the final verse. After the memorable chorus repeats, the song fades into a tripped-out continued conversation about how the edibles are affecting them, with that hip-hop beat continuing on through the fadeout.

Halfway through the album, they slow the pace down with a rhythmic and psychedelic guitar intro into “Cantina,” a more laid-back reggae tune that incorporates catchy vocal harmonies between both singers on the chorus. “Cantina” is a lyrically-relaxed tune that is typical to South Florida lifestyle of hanging out at the beach bars drinking margaritas and eating tacos and was inspired by Calaveras Cantina in Jupiter where Schmeider works. Each singer presents their own verse with DeMoura spitting another finely-tuned and ascending chill rap flow.

Suddenly the gears shift into another heavy, nu metal-style intro with Giddens beginning the first verse, pontificating over dealing with constant fights with a lover by heading to the “Dawghouse,” where he gets some relief while being in the literal doghouse. The “Dawghouse” is a reference to South Florida resident, David House, who helps promote reggae music in the region through Dawghouse Promotions and where many bands travelling through the state come to stay and have a good time by enjoying Dawghouse Moonshine, amongst other things. This tune has a very Kottonmouth Kings vibe about partying and forgetting about petty romantic squabbles through inebriation.

The final track continues that hard-hitting pattern of heavy guitar intros and drums. “Fall In Line,” continues on with steady guitar strumming and hi-hat rhythm with Giddens and DeMoura talking about being profiled and getting pulled over by the police. Afterwards, DeMoura raps passionately and the chorus repeats with both singers harmonizing about telling society “no sir, no sir” to falling in line. Judge DeMoura then sentences Giddens, using a Southern accent, in a trial setting for “thinking for your-self and challenging facts.” Giddens responds by telling the judge that he will not fall in line and continues on to protest the authoritative political regime of corruption that can be prevalent in our society, and calling out for us to stand and fight for our freedom.

The overall vibe of Bad Habits epitomizes not only young South Florida culture, but youth culture nationwide as well. From breaking bad habits in vices, relationships, and mental health, while maturing into adult lifestyles and societal standards, and trying to balance fun at the same time; to being profiled by authorities and society for looking and acting different than the conformed norms that American culture deems standard. As DeMoura puts it, “Everyone’s got a fix or a place they go to unwind. We were hoping to share a few of ours with the world and show what unites us all as a group. A good time vibe with a pension for not backing down to societal conformity.”
Unified Mind will continue to break out in the South Florida music scene with their show at Respectable Street in Downtown West Palm Beach, for the popular Highly Rated Reggae Wednesday night show on April 1st! Check out the Bad Habits EP and Unified Mind’s other earlier single releases like, “Tension,” Symbols of Power,” and “Palm Trees & a Lighter,” plus other projects from this collaborative group: Vibes Farm, Home Grown Rebellion, Reefers, and Fireside Prophets on Spotify, Youtube, Apple Music and other streaming platforms, to support talented local music and to enjoy “good time” music!