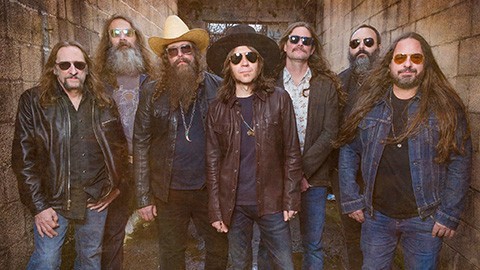 WHO: BLACKBERRY SMOKE WITH: ELIZABETH COOK

WHAT: American rock band Blackberry Smoke has become known for a singular sound indebted to classic rock, blues, country and folk. Since their debut, the Atlanta-based band has independently released six full-length albums and toured relentlessly, building a strong and loyal community of fans. The band has also had unparalleled success with sales of each of their last albums. They released Holding All the Roses, which was the first independently-released record to hit #1 on the Billboard Country album charts in modern history. Like An Arrow followed, again putting them at #1. The band outsold all other releases with their self-produced Find A Light plus the acoustic accompaniment, The Southern Ground Sessions. Most recently, Blackberry Smoke released Homecoming: Live in Atlanta, a recorded performance from their annual show in the band’s home town. It also debuted at #1 on Billboard’s Americana/Folk sales charts. This became the 4th consecutive album for Blackberry Smoke to be atop the charts. In addition to their success domestically, the band has also had #1 Rock, #1 Independent, and #1 U.K. Americana album chart releases in the United Kingdom and Europe.

For close to 20 years now Revolution Live in Ft. Lauderdale has been called the premier Live Music Venue and Nightclub in South Florida. Boasting state of the art sound and light systems, Revolution Live has established itself as a popular entertainment destination for music lovers everywhere. And when you talk about live performances, some of the best names in the business have played on the exciting 10Revolution Live stage, including multi-platinum award winning performers like Arctic Monkeys, Pink, Snoop Dogg, Fall Out Boy, Katy Perry, Lady Gaga, Smashing Pumpkins, Mos Def, the Black Crowes, Wu Tang Clan, Panic! At the Disco, Avenged Sevenfold, My Chemical Romance, Chris Cornell, Modest Mouse and more, with more to come. Pollstar has ranked Revolution Live the number two rated live music club in the state of Florida and 37th in the World (based on number of ticket sales). And now more rock history was created at Revolution Live when it served as the location for shooting the major motion picture “Rock Of Ages” starring Tom Cruise, Alec Baldwin, Russell Brand, Catherine Zeta-Jones and Julianne Hough. Don’t be left behind. Become part of music history and join Revolution Live!

ALSO ON SALE AT REVOLUTION LIVE: