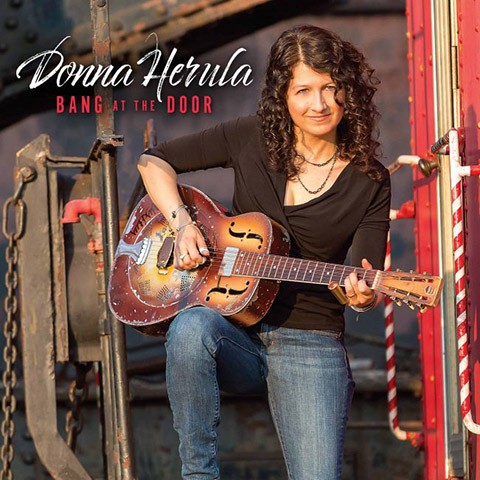 Although Donna doesn’t say so, I get the feeling that in some strange way the original title track is dedicated to someone – to be exact, someone she’d like to forget.  You see, that “Bang At The Door” that’s stressing her out is coming from the hand of a drunken ex…..at two o’clock in the morning.  Despite there only being three performers – Donna with a very impressive and masterful performance on the resonator, along with FJ and Dana laying out some serious rhythm – there’s a whole lot of good music goin’ on.

Having tried many times, at the end each and every one of them I came to the conclusion that I’m better at listening to other artist’s compositions and writing about them, than I actually am at writing a song myself.  That said, as I listen to Donna tell of her gracious relationship with our dear and late friend Sunshine Sonny Payne, I almost feel that if there was ever a song I could have written, this is it.  The song is titled “Pass The Biscuits” and with several verses of praise, it’s a wonderfully heartwarming tribute to Sonny.  Having had the honor of being on his show several times, along with breaking bread and  sucking down martinis with him at the House of Blewzz, as I listen to Donna so joyfully say:  “As a man in his eighties he acted more like a teen and he treated each guest like a king or a queen.  Everybody loved him, he was one of a kind.  A southern gentleman that’s just a ray of sunshine”; I’m so understanding exactly how Sonny made her feel.  Donna, from the bottom of my heart, thank you so much for writing and performing this fabulous tribute to an absolutely beautiful man.  Of course, the accompanying music was awesome, as well.  On their only appearance together, Doug and Tony give the track a fun, Dixieland vibe on the piano and trumpet; as you’ll hear often, FJ and Dana are all over the rhythm; and with harmonious support from Rebecca, Donna’s lead vocals make these sweet lyrics so much sweeter.

The guitar riffs on “Can’t Wait To See My Baby” were strongly reminiscent of “Memphis, Tennessee”, and just like Chuck Berry couldn’t wait to get in touch with his Marie, Donna and Tony take turns singing about how they just can’t wait to see their baby.  It’s a love song on which the husband and wife duo of Donna Herula and Tony Nardiello anxiously look forward to reuniting after nearly a month apart.

“Black Ice” and Lucinda Williams’ “Jackson”, are the kind of masterful performances that I like to say should be mandatory listening in music class. They’re both duets with the first being an instrumental featuring Donna on a resonator and FJ on instruments of percussion; the second is a soft acoustic ballad that features hubby Tony on lead vocals and acoustic guitar and wife Donna on backup vocals and resonator guitar.

Stars and planets all over the wall; a Snoopy blanket and a Bozo doll; a Bert and Ernie bat and ball; vinyl records on the floor; a big Prince poster on the door; a Rubik’s Cube on her desk; and The Breakfast Club on VHS; probably aren’t items you’d currently expect to find in Donna’s room.  On the other hand, as a result of having lost her job and all she owned; not having any money or being able to get a loan; a stack of bills and no cell phone; they are all things she discovered upon “Movin’ Back Home”.  Although what’s next in store for Donna – while now living in that old room that hasn’t changed at all – isn’t very  funny, the lyrics are absolutely hilarious.  With the the catchy chorus line you just might find yourself singing along with the rest of the backup singers.

If you think the title “Got What I Deserve” features Donna proudly singing about rewarding achievements, you’d be mostly wrong…..but eventually right.  On another cleverly written and humorous track, things appear to be quite contrary……until a guitar magically makes things magical.  This wonderful cloud with a silver lining song features fabulous acoustic guitar pickin’ by Jon Shain, the songs co-writer; fabulous fiddlin’ by Anne Harris; and, as on every song she sings, fabulous vocals by Donna Herula.