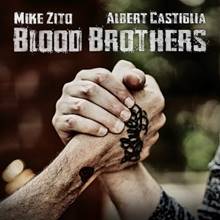 NEDERLAND, TX – Gulf Coast Records announces a March 17 release date for one of the most-anticipated albums of the year, the upcoming Blood Brothers disc featuring multi-Blues Music Award-winners Mike Zito and Albert Castiglia. The duo concluded a highly-successful string of “Blood Brothers” shows in the spring/summer of 2022 with new tour dates already announced beginning in February and running through the summer, culminating with a special appearance at the Big Blues Bender in Las Vegas in September. Blood Brothers was produced by Joe Bonamassa and Josh Smith and recorded at Dockside Studio in Maurice, Louisiana. “Sweet Mama,” the album’s first single/video, drops February 10th.

“This album was a blast to make and I am even more excited to take this music out on the road and perform for the people,” says Mike Zito. “It’s just a bit more complex with an overall band dynamic that I think sets apart from what Albert and I normally do.”

“The making of this album was a ‘brotherhood’ in every sense of the word,” adds Albert Castiglia. “The production team of Josh Smith and Joe Bonamassa, along with Mike and I created something incredibly special. I hope our fans enjoy this collaboration as much as we did.”

Mike Zito and Albert Castiglia are true “Blood Brothers” in life and in the music they create both individually and collectively, joining forces in a collaborative effort of songwriting and performances to create a total listening experience greater than the sum of its parts. Added to that process are the talents of producers Joe Bonamassa and Josh Smith, who brought fresh ideas to the recording sessions, pushing Mike and Albert creatively and musically to present their best work to date.

“Mike and Albert have a special chemistry together when they plug in and play that few have. They finish each other’s sentences musically,” award-winning guitarist Joe Bonamassa said about the sessions. “Great tunes, great people, great hang! What’s not to like? It was an honor to be involved in this project.”

“Mike Zito and Albert Castiglia have done something special,” added co-producer Josh Smith. “They have both found their musical confidante. Most solo artists never even look – let alone find – theirs. They have brought together a real ‘band’ using members of each’s solo acts. The sum of all these parts added with a tremendous effort to both write and perform the strongest record of their respective careers has paid off in a special album. Blood Brothers indeed! Joe and I are proud that these brothers trusted our partnership to produce this special album!”

Of the many insights into the songs on Blood Brothers, Mike Zito offered these two about “‘In My Soul’ and “One Step Ahead of the Blues”: “In the summer of 2022, my wife Laura was diagnosed with cancer. It was a surreal shock. Albert suggested I write songs about how I felt, but I said no. I just couldn’t bring myself to that place yet. ‘In My Soul’ is the only song that came out of what I was feeling at that time. I didn’t think about it or analyze it, I just started singing.

“For ‘One Step Ahead of the Blues’: I am a JJ Cale fanatic. I love his voice and his style. Although JJ did not write this song, his recording has always been on my playlist. It just fits this band and album with Albert. It turned into a great duet that makes for a strong bond.”

Albert Castiglia ventured inspirations for “A Thousand Heartaches” and “Tooth and Nail”: “In March of 2022, while on tour in Delaware with The Blood Brothers, Mike asked me to write a ballad for the new album, because we were well-stocked with up tempo numbers and needed to change the pace a little. Ever since I was a kid, I wanted to write an unrequited love song like ‘Bell Bottom Blues’ by Derek & The Dominos or ‘We’ve Got Tonight’ by Bob Seger. I’ve been through unreciprocated and forbidden love in my life, but never had the songwriting chops to express how I felt in the midst of it. Most of my songs of love gone bad or love never meant to be usually had me coming off as bitter. I wanted to change that, dig into my past and write something that had me taking the high road and coming off a little more dignified. I think my songwriting has come a long way and ‘A Thousand Heartaches’ is a result of that progression.

“And when Tinsley Ellis writes a song for you, you listen! Tinsley came to our Blood Brothers show in Atlanta last summer and told us he had a few songs that he had written for us. ‘Tooth and Nail’ grabbed my attention right away. It has all the elements that appeal to a blues-rock guy who grew up in Florida. To me, it’s the ultimate southern rock, Florida/Georgia blues tune. It’s signature Tinsley. It was an honor to sing and play on this one.”

Mike and Albert will be hitting the road again in support of the new Blood Brothers album, with dates booked by Intrepid Artists. With over 45 years combined in the music business, Zito and Castiglia have toured the world spreading joy and bringing the music to the people. For the upcoming “Blood Brothers” tour, both Mike and Albert will be onstage performing together for the entire show, so fans can enjoy the amazing chemistry and creativity that these two musicians share with each other – and the audience. In addition to their own rock, blues and roots individual tunes, the set will feature a number of songs from the Blood Brothers album.